Bun in the Oven slot game 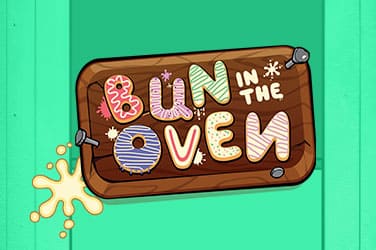 Baking buns can be a lot of fun, but with the Bun in the Oven slot game, it can also be extremely rewarding! This game from Black Pudding Games sees you join chef Pat O’Cake to deliver some interesting and colourful buns which can also provide you with some healthy and tasty rewards.

The game is structured more like a scratch card game than a classic online slot, but that only adds to its charm and appeal. There is a static green background, on which an oven forms the reels. This is quite an interesting and unique approach, using a theme within the game as one of the game elements, and the various buns inside the oven all have faces that change depending on the combinations and wins that you land, which adds a little bit of character to this game as well. The soundtrack is quite good as well, and adds to the game experience without being too overbearing and making you want to mute it. Another nice themed feature is the use of the oven mitt to ‘scratch’ the reels and reveal your payouts.

This game has three reels with three rows, and nine active paylines. Wins are generated by having combinations of the same symbols being revealed within three scratches after a spin, with three matching symbols needed for a win.

Players can bet from $/€/£0.10 up to $/€/£100 per spin, while an autospin option is also available for those who want to increase the pace of their gameplay.

Given the game’s theme, all the symbols on the reels are buns of various colours. These are red, gold, yellow, green, blue and purple, from the most valuable to the least. For example, revealing three matching red buns within the first three reveals of a spin will win you 25x of your stake, while the same for the purple buns will be worth 1000x, which is also the maximum win on this game.

Bun in the Oven Slot RTP

This is quite an interesting slot game from Black Pudding Games, as it is more of a scratch card game than the traditional reels-based slot games that we are used to. This adds an interesting dynamic to the game, and there is definitely a lot of fun to be had, especially with Pat O’Cake’s reactions upon wins and losses. There is maybe a case to be made for this mad Irish chef to feature a little more in the game, as he is one of the most enjoyable elements, but this is not too much of a problem. The scratch card element adds quite a lot of intrigue and suspense, much more than in regular slot games, and this should keep players interested for quite some time, along with the potential for some huge wins if the reveals work in their favour.