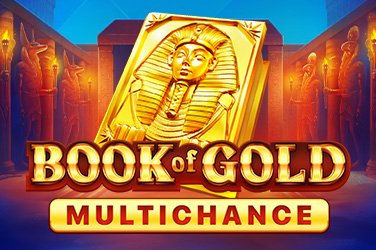 There are enough book-themed Ancient Egyptian slots out there to fill the Great Library of Alexandria, but is Book of Gold Multichance anything to write home about? It certainly looks the part with an amazing looking temple setting and some suitably grand and spooky symbols, much like its other Book of Gold siblings like Book of Gold Symbol Choice and Book of Gold Classic.

One thing you’ll immediately notice about this slot is how bright it is, and gone are all the musty tombs and spooky pyramids you might have seen in similar games. The background of the reels is lit by torches so strong that it almost looks orange, and there are huge statues of the gods Anubis and Osiris to flank the symbols as you play. On the reels themselves, there are a range of symbols typical for Egyptian slots such as the Ankh, the Eye of Horus, King Tut’s mask and the book of gold itself, all fabulously drawn and picked out in gold and jewels, while the low-value symbols are the standard 9 – A The animations are also fun and atmospheric, while suitably grand and gothic music swells in the background as you win, adding to the excitement.

The mechanics in this game are similar to a number of Egyptian themed games, and especially the other Book of Gold games, and apply mostly in the free spins element of the game. In the main round, there is a fairly typical five reels and three rows while there are 10 pay lines to play on, and while the major symbols aren’t the best paying at a maximum of 500x per spin, there is still the bonus round to help you boost your winnings. This is reflected in the RTP of 95.4%, which isn’t the highest, and means you’ll need to make hay in the bonuses to get rich.

As in the other Book slots, the Book of Gold Multichance slot game hinges on landing the book scatter as much as possible, which triggers the free spins as well as netting you 200x your stake. The power of the book comes into play here, selecting two of the symbols to be special, and when they land they’ll take up the whole reel that they land on and stay for the rest of the free spins. If these symbols land anywhere on the reels they’ll act like scatters, and you can generate wins even if they aren’t in a line. Re-triggering this feature during the free spins isn’t hard, and if you can do this you’ll add to the number of symbols up to a maximum of nine, further boosting your ability to make big wins. If you like you can also forego the scatters and buy entrance to the bonus round for 100x the max stake, which may make you a fortune.

Book of Gold Multichance is a slot built around a single mechanic, but what a mechanic it is! This means it’s not as well rounded as some slots which try to do a bit of everything, but if you like the magic symbols mechanic then you’ll have bags of fun with this game. It looks good, it plays well and it’s a lot of fun, so why would you miss out?