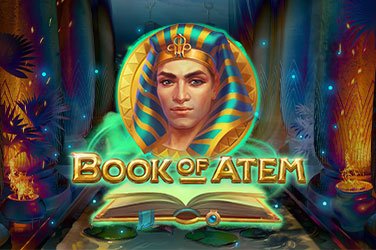 Microgaming and All41 Studios have teamed up to bring players Book of Atem, an ancient Egyptian themed slot with all the go-to symbols that represent the former civilisation. The game offers lucrative multiplier bonuses, ample paylines and a high level of variance that combine to create an exciting gaming experience and the offer of big wins for those who stay the course.

Keep an eye out for the star of the game, Atem, who the historians out there will recognise as one of the major deities in ancient Egypt and a regular feature in many pyramid texts.

Players of Book of Atem are presented with a regulation 5×3 playboard featuring traditional playing card values starting from a lowest value of ‘10’ right through to aces, represented with the letter A. In addition, you also have objects such as lotus flowers, serpents and even Atem himself makes an appearance if you’re lucky.

The aim of the game is fairly straightforward, with players needing to match three adjacent symbols on one of the ten paylines to scoop a prize. Free spin features are also lurking around the corner if players can line up three matching book symbols.

An average Return To Player (RTP) percentage is something in the region of 95-96% and with Book of Atem climbing towards the 96.5% mark you’ll be pleased to know that it’s one of the better rates around. The slot variance is rated as high which means that big payouts are out there but are slightly more thin on the ground when compared to less volatile slots that offer regular, albeit smaller wins.

You can certainly see that a great deal of time has gone into the design and layout of the game, with the Egyptian-themed symbols all having their own delicate, sophisticated look that elevate the overall look of the game. Book of Atem’s choice of soundtrack is also spot on, with an intense theme song that gives you a gripping level of tension with each spin.

Payouts aren’t the most consistent we’ve seen during regular gameplay but when they do come around they offer more than enough to make you want to keep spinning in search of those magic books that unlock the highest paying wins. When you match three books, you are taken to a feature that opens up a larger book in the centre of the screen, and a roulette-style turning of pages commences until you land on a page that determines how many free spins you get. This then takes you back to a bonus playboard where your bonus bounty is spun.

On the whole, Book of Atem is the full package of a well carried out concept, along with a nice balance of variance and paylines that keeps the game fun. History buffs will love the recreation of the Ancient Egyptian setting while players who love grinding out tasty wins will not be disappointed.