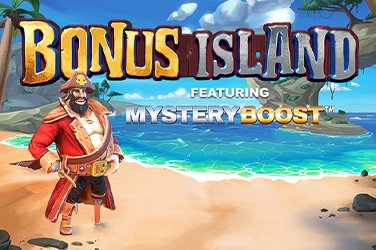 Pirates have always been popular and players will feel they can be one in with the Bonus Island bonuses that are on offer, as a number of free spins are available. Check out this Bonus Island slot game review to learn more about this title from Inspired Gaming!

Following a theme that combines pirates and a deserted island, Inspired Gaming have provided a rather fun visual experience as players will see that there is a sandy beach, with a number of rocky cliffs and a blue sea in the background, thus helping to further enhance the overall experiences felt.

There is a playing grid that consists of 6 reels and 5 rows, with each symbol representing something to do with pirates. There are a total of 15,625 winning ways with each spin that features a combination of three or more matching icons on adjacent reels providing players with a winning reward. The total number of winning ways is achievable as this game features a Cascading Rewards mechanism with each win triggering a cascade that can continue to go on and on until a win can not be formed.

Bet amounts start from $/€/£0.10 per spin, although those that fancy placing a wager of greater value are able to place a maximum bet of $/€/£10 per spin.

As mentioned, the symbols feature a pirate theme with items such as anchors, maps, swords, and pirates themselves all featuring, alongside the traditional royal playing card values.

Our Bonus Island slot game review found that there are a number of different special features available in this game, including a ‘Mystery Boost’ feature.

When playing the game, players will notice that there are a number of blank symbols that can appear on the grid. However, these are key to the mystery boost as these symbols will transform into other icons or coin prizes.

Those that trigger the coin feature will see a value be provided, which will then all be added up and awarded.

Furthermore, there is a Bonus Island treasure map feature which can be triggered when the meter on the left hand side of the playing grid is filled up. Players can simply do this by triggering a certain number of cascades.

Players will be presented with a treasure map and they can select 3 items from the map at a time. Once these 3 have been picked, the pirate captain will make an offer that players can accept or refuse. On the last round that is played, there will be two boxes; players will be able to pick one of them with either cash or free spins available to win.

The Bonus Island free spins rounds will allow players to receive an increasing win multiplier on each cascade that happens, whilst the blank icons will always transform into paying icons or coins that will trigger the coin feature mentioned above.

The return to player (RTP) rate of this Bonus Island slot game from Inspired Gaming stands at 95.78% and has a medium volatility level.

With the sheer number of great Bonus Island bonuses on offer to make the most of, as well as a total of 15,625 different ways to win, there is plenty of enjoyment to be had with this pirate-themed online slot game.

Inspired Gaming have done an excellent job creating this title and has left us feeling pleased after doing this Bonus Island slot game review for you!