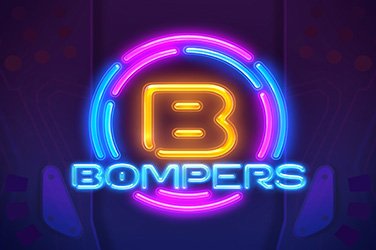 With a total of 262,144 different ways to win, as well as a number of great Bomper bonuses such as free spins on offer, we would thoroughly recommend reading this Bompers slot game review to learn all about the slot game from ELK Studios.

Bompers has a retro theme that is inspired by some rather innovative game screens as it is rather funky as it features a cool purple colour, as well as some cool animations that appear on the playing board.

This playing grid isn’t of a typical nature though, as it doesn’t feature the traditional reels and rows that could be normally seen. Instead, ELK Studios have provided areas in which symbols will drop in 4s to begin with, across a total of 6 columns.

There are a total of 262,144 different ways to win, thus making it highly enjoyable and one that can provide some rather big rewards. This is allowed to happen as the game features a Cluster Pays mechanism, with players only having to add 3 or more matching symbols across the columns to see that sequence disappear and have new symbols take their place. When gaps appear, the icons already existing will move to the left or right, rather than fall straight down, as the circular shape would suggest that would happen naturally.

Symbols available on the paytable of this Bompers online slot game consist of many of the classic fruit machine icons that can traditionally be found. There are cherries, lemons, oranges, watermelons, irish four-leaf clovers, horseshoes, BARs, and Lucky Red 7s.

There are a number of special bonus features in this Bompers online slot game with the symbols also playing a key role. The Bompers are special symbols that have the potential to become wild and their meter will be charged each time they hit another icon. Once the meter is full, the bumper will turn into a sticky wild that will remain in the game for all of the following cascades that happen in a single spin.

Other special reel modifiers that are available include the mystery bombs that will explode at the end of a spin and turn all surrounding icons into the same icon, whilst there’s also a shooting star icon that shoots upwards and forms a group of symbols above the current set.

The free spins bonus in this Bompers game is called a ‘Free Drops’ game, and it is triggered when players land 3 bonus icons on the reels. A further 7 free drops will be provided, where any sticky Wilds that are triggered will remain in place for the rest of the bonus.

Players can also look to use a ‘Bonus Buy’ option called an X-iter in this Bompers online slot game, with a number of different options provided:

Our Bompers slot game review found that the return to player (RTP) rate for this online slot is 95.70% although it does contain a high volatility level rate.

With so many Bompers bonuses and a huge 262,144 different ways to win on offer, ELK Studios have provided players with a game that they can seriously enjoy and win big from! With classic fruit machine symbols on offer, as well as a nice RTP rate, this Bompers slot game should be played as soon as possible!