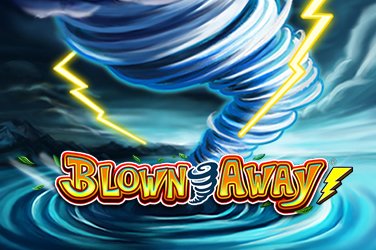 Developed by Lightning Box, the Blown Away Slot Game is a five-reel, three-row slot with 25 paylines. With a windy weather and animal theme, this fully optimised game offers top wins of up to 250 times your stake.

With a Return to Player (RTP) of 95.70%, the Blown Away Slot Game is considered a medium volatility slot.

The Blown Away Slot Game is based around the idea that there’s a storm brewing, and a group of animals are sitting directly in its path, risking being ‘blown away’. The reels are set within a bamboo structure in front of a tropical backdrop, where we can see sandy beaches, boats and swaying palm trees. The graphics are high-quality throughout, with the accompanying soundtrack further enhancing the theme.

In terms of symbols, you’ll find the usual low-paying playing card royals – 9, 10, J, Q, K and A – alongside high-value monkeys, lizards, white birds and penguins. The walrus dressed like the captain of a ship acts as the wild within the game, substituting for all other symbols apart from the boat and tornado bonuses.

The tornado symbol acts as a second wild within the game, and can only appear on the fifth reel. When it lands, it’ll trigger the exciting tornado respins feature, resulting in a respin with the lowest paying symbol removed from the reels. If you land another tornado symbol during the respin, the feature will repeat. This can continue for as long as you continue to land tornadoes.

Trigger the free spins bonus round by landing a minimum of three boat bonus symbols in any position across the reels. When you do, you’ll receive ten free spins. It’s possible to land tornadoes during the free spins bonus round – if you do, the tornado can drag a cow away with its force, resulting in increased multiplier wins worth up to seven times the original prize. However, there’s the chance that the cows will run out of the tornado’s path, meaning you won’t increase the multiplier. The free spins round can’t be retriggered by landing further boat bonuses, but there’s the chance to significantly boost your prize pot by combining this with the tornado respins feature.

The Blown Away Slot Game is an entertaining slot with high-quality graphics and the chance to land decent sized wins worth almost 1,000 times your total stake through the exciting tornado respins and free spins features, particularly if the high winds manage to catch the cows! The theme is solid and we like the accompanying soundtrack. We’d have liked to see the volatility match the gale force winds, however, the Blown Away Slot Game is still a decent all-rounder which we think is worth a spin.