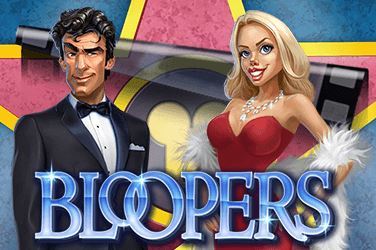 The Bloopers slot game is one of the better creations from ELK Studios. It is a relatively recent offering but one of higher-ranked ones. It came into the market in March 2016.

Bloopers has a great storyline and it comes with excellent graphics and a very catchy soundtrack which really adds to the blend of the game. With it being a more modern slot it is not a surprise that you can play it across desktop, mobile or tablet devices.

That storyline sees us taken backstage into an awards ceremony as the stars of Hollywood take the famous Walk of Fame. There are five reels on the Bloopers video slot and up to 243 different ways to win.

There are a lot of different icons used on the reels. The lower paying ones are pretty traditional because they are the typical playing card icons – 10, J, Q, K and A while the ones which pay better include the lead man, the blonde actress, the reels of tape and the movie famed clapper board. It is the Bloopers logo which is the Wild symbol in the game and the Hollywood star acts as the Bonus one.

There is a strong feature game to the Bloopers slot game. The Free Spins Bonus feature is the first one to focus on. You need three or more of the Bonus icons to trigger the game. There is a lot going on in this feature and you’ll immediately see the male and female movie stars landing on the middle three reels turning into Sticky Wilds. There is no end in the free spins until all the positions on the middle three reels have been turned into Wilds.

The big thing to keep an eye on are the bright creatures. These are known as Bloopers and can be in play during the base game or the feature. When one comes along they reward you with one of five different smaller features.

If the blue one appears you get a number of expanding Wilds. The green one will get you some falling icons while the pink Blooper brings more free spins with it. The purple one offers up symbol shuffles and the sound tech man delivers random wilds. You can land more than one Blooper on the same spin which can increase winning potential.

The RTP rating for the Bloopers slot is 96.1% which is pretty much bang on the average for a slot game, especially a modern one such as this.

Bloopers is a really great game and when you get to grips with everything that is going on in it you can get a huge amount of enjoyment out of it. Graphically it is as strong as we would expect an ELK Studios slot game to be and the classical soundtrack is nice too. The different characters and colours in the game are really appealing and with the feature easy enough to launch, and the Bloopers bringing extra to quite a few base game spins, the gameplay is fantastic. Make sure you give this great machine a try. You won’t be disappointed!