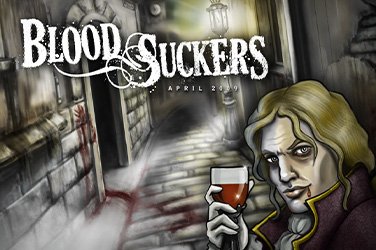 This Blood Suckers slot game review will highlight all of the great Blood Suckers bonuses NetEnt have provided, including the free spins and bonus games that can be triggered, whilst the RTP rate of 97.99% is incredibly appealing.

Unsurprisingly, NetEnt have decided to follow a vampire and gothic theme with this gruesome online slot game title.

The graphics applied certainly help to provide the theme desired in an excellent way as players look to be in an alley that has blood splattered across the walls, whilst there is a creepy soundtrack that features throughout the game.

The game is played on a playing grid that consists of 5 reels and 3 rows, whilst there are a total of 25 different paylines available to form winning combinations on. There is a game panel towards the bottom of the grid that allows for bettors to customise their overall experiences, including the ‘autoplay’ and ‘Max Bet’ functions.

The symbols used in this Blood Suckers slot game feature things that would be seen as traditional with the vampire theme adopted as cloves of garlic are available, as well as crossbows, a magic book of some kind, a potion and 4 rather spooky characters. The vampire in the red hat is the most valuable when 5 appear on an active payline.

In addition to these symbols there are three special ones, including a wild, a bonus, and a scatter, each of which are easily identifiable by the wording used.

Throughout this Blood Suckers slot game review, we found that there are a number of different bonus features, with the free spins one perhaps one of the better ones.

Players can trigger this when they land 3 or more of the scatter icons, which is the bride, and they will receive 10 free spins. During this round all wins are tripled, although any further free spins that are provided will not come with a payout.

Another free game available in this Blood Suckers slot game is the bonus game that can be triggered when 3 or more bonus icons that are adjacent to each other from the left land.

Players will be transported to a second screen, where they will find themselves in a burial chamber that has 12 coffins. All they will simply need to do is choose a coffin to open and a number of coins as they slay the vampires that are resting. This game will continue as long as vampires are found.

If they pick a coffin that has bats that fly out of it, the game will end and all the coins collected will be added up.

Another great feature that is perhaps not found in many other online slot games is that players are actually able to stop the reels whenever they wish, as there are arrows that appear on the spin button.

When looking at the return to player (RTP) rate for this NetEnt Blood Suckers online slot game, we found that it was set at 98% and comes equipped with a low volatility level, therefore, wins can be frequent but rather small at times.

With such a high RTP rate and a number of great Blood Suckers bonuses available to help produce some potentially lucrative wins, players will love the gothic and vampire themes NetEnt have opted for in this game, even if they are not quite fans of the genre!