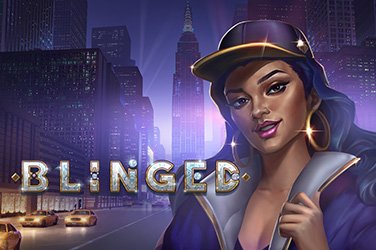 It’s time to dig out your baseball cap and gold chain, because Blinged is set in the glitzy, glamorous world of American hip-hop, and you wouldn’t want to look out of place. This is a world where wealth is everything, and nobody wastes an opportunity to show it off, which is a good sign for slot players looking to make a fortune.

But is this slot the real thing, or is it all just an act? Let’s take a look at our Blinged slot game review.

Blinged opts for a cool, urban vibe for its theme, with a dusk cityscape bathed in artificial light taking pride of place behind the reels. These are the streets where you go to make a name for yourself, to be seen as a rich and successful player, and how better to show that off than with the bling in the symbols: Diamonds the size of a fist, gold rings, gold trainers, wads of cash and gaggles of beautiful hangers-on to show off your big-time credentials. Unfortunately, the low-value symbols are the generic 9 – A, but even these have been given a diamond sheen to them so they glitter as you spin the reels. There are a few low-key animations to help bring this game to life, while a chilled hip-hop soundtrack bubbles away in the background to help set the scene.

Under the hood Blinged doesn’t do anything controversial with its mechanics, utilising a standard five-reel and three-row setup while there are 10 pay lines to play on. The high-value symbols range in worth from 25x your stake for five up to 75x your stake, a fair whack of cash if you’re betting at the maximum of £/€/$100, while the woman in the Wild hat pays 100x your stake while substituting for other symbols to help you make combos. All in all the RTP works out at 96.25%, which isn’t too shabby because there’s plenty of extra cash to be found in the bonus round.

The mechanics used in the free spins bonus are a little strange unless you’ve played any of the other games in this series because they almost make you want to lose, which is not a normal way to feel for a slot player! The Blinged slot game uses win spins, so when you land three diamond scatters you’ll be given five spins that only end when you win, meaning that you can keep re-spinning over and over again on losing spins until you succeed. Not only that, but each re-spin adds one extra to the multiplier ticker, so when you eventually do win you could do so with a hefty multiplier under your belt.

Blinged is a nice looking slot that fills out its theme well and has some decent prizes in its main game, but the excitement is all about those win spins in the bonus round, and it’s where your entire fortunes will rest. Do well there and you’ll be rich, and with so many opportunities to pick up extra cash, you’ll soon end up all blinged up yourself!