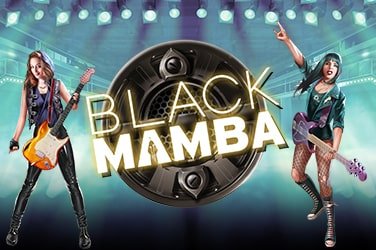 Brought to you by Play ‘n’ Go, the Black Mamba Slot Game is a five-reel by five-row slot which operates using a cluster pays gaming engine. The concert-themed game is based on the Italian rock band and has a fully responsive design.

With a Return to Player (RTP) of 96.50%, the Black Mamba Slot Game is considered a high volatility slot.

Black Mamba is an Italian female-fronted rock band, as represented through the Black Mamba Slot Game theming. There is a black and white star and poster-filled background which the reels sit upon.

In terms of symbols, the lowest paying include microphones, headphones, drumsticks and guitar picks. The higher paying symbols are represented by the Black Mamba band members – Cecilia, Fred and Alexandra.

The wild symbol within the game is the snake, which is the band’s logo and can substitute for all other symbols. The lead singer, Martina, is the second wild, doubling any wins he helps to form. He’s also the most rewarding symbol across the entire set, offering multipliers worth two, six or 50 times your stake when you land three, four or five in combination.

The Black Mamba Slot Game follows the same style of most Play ‘n’ Go grid slots – when winning combinations are formed, the winning symbols will be removed from the reel, and those above will fall into place, possibly resulting in a new win without having to spin again. The wild symbol can appear in the middle of a win consisting of three symbols, and the win multiplier value will increase every time the reels cascade.

Solo features and the Concert feature

In keeping with the game’s theme, ‘Solo’ features can randomly trigger following any non-winning spins. A different feature will activate each time, as determined by the active band member:

Cecilia feature. One or two wilds will be added to the grid.

Fred feature. One set of symbols will be transformed into an alternative symbol.

Alexandra feature. Two sets of symbols will be destroyed, allowing other symbols to land in view.

Martina feature. Except for wilds, all symbols on the bottom row will be destroyed, and a high-paying Martina symbol will replace another one of the bank members. This feature can only be activated in the Concert round and throughout free spins.

The concert feature can be triggered by filling the meter with wins resulting from band member symbols. Each symbol will fill up one section, with four sections needed to trigger the concert feature. When it begins, the Solo bonuses will play out in consecutive order.

Clearing the entire grid will trigger the free spins round, where the Martina Solo feature will come into play. There’ll be an increasing multiplier with every win, plus the chance to land further free spins by charging the meter. The Concert feature can also activate, rewarding cash prizes worth 50 times your stake if you clear the grid.

The Black Mamba Slot Game is an entertaining slot and is jam-packed with bonus features to keep the pace fast. The key to boosting your prize pot is landing consecutive wins which will subsequently increase the multiplier and simultaneously charge the meter to trigger the Concert feature. The free spins round offers the chance to land huge wins with Martina in play.