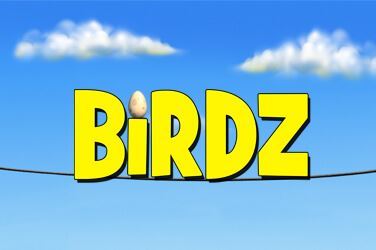 There’s nothing more annoying for a farmer than birds destroying your crops, but don’t worry, there’s an upside in this slot! Help him take care of these feathered little hooligans with his trusty shotgun, and you could bag some serious rewards.

If you’re ok with a bit of random violence in the name of agriculture, Birdz is a fun and varied slot with some imaginative mechanics and bonus rounds that will keep you coming back for more. So will you be celebrating the harvest or stuck in the mud? Let’s take a look in our Birdz review.

One of the first things we like about the Birdz slot game is the imaginative way that it tackles the cascading reels format, one of the most popular formats of recent years. Birds fly onto a set of electrical wires from the back of the reels with each spin, with winning symbols eliminated and flying away, causing more birds to fly in and replace them. The rest of the main game is pretty self-explanatory, and unusually there is no specific bonus round, with all the bonuses being available in the basic reels. All the symbols are represented by different coloured birds, the brighter the colour the more valuable it is, and there is also a wild symbol represented by an egg.

The graphics are quite retro, but they do well in depicting the action, with cutesy little animations as the birds fly in and out as well as more dramatic effects during the bonus rounds. There is no music, and the sound effects can get a little annoying after a while. In terms of the business end of this slot, it’s not exactly got the highest betting limits, with a range from £/$/€0.30 to £/$/€/30, though a maximum jackpot of 90,000 coins should be enough for anybody! This all adds up to an RTP of 95.4%, which is about average.

So how do you activate the bonuses without a scatter? Like many cascading reels games, the bonuses are launched by landing several cascades in a row, and you can win up to six bonuses this way. Each cascade fills up a meter to the left of the screen, lighting up the bonus you’ve won, and the best part is that you get to play every single bonus you win one after another. Another bonus you also encounter is Bird Blitz, activated randomly after a non-winning spin, causing the skies to go dark and stormy and replacing the birds on the reels over and over again until a winning combo is formed.

The shotgun bonuses eliminate symbols, one in the first bonus and two in the second. The zap bonus sends a current down the electrical wires the birds sit on, eliminating a whole random row. The pecking order bonus replaces three random low-value symbols with high-value symbols. The scarecrow bonus scares all the birds away, replacing them all in what is effectively a free spin. The cracking wilds bonus replaces all the symbols on the first three reels with wilds.

Birdz is a fun and inventive slot, and we certainly can’t fault them on the variety of their bonuses, which really add spice to the game. It’s also impressive that you get to play all the bonus rounds that you win one after another, potentially racking up big wins. The graphics are a little ropey, but with fun animations accompanying each bonus round, you can’t fault their ambition.