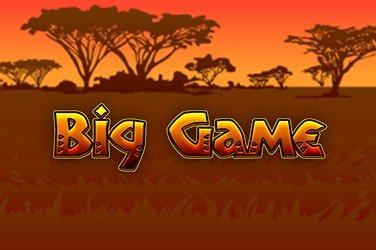 Developed by Saucify, the Big Game Slot Game is a five-reel, three-row slot that takes players on a safari adventure, offering the chance to win across 30 paylines. This African Savannah themed slot is optimised for all devices, so players can enjoy full compatibility across all of their devices. There are some fun bonus features and plenty of ways to boost your prize pot within the game.

With a Return to Player (RTP) of 94.70%, the Big Game Slot Game is considered a low volatility slot.

The Big Game Slot Game is set in the dusty African Savannah and is home to some of Africa’s most amazing animals. We can see a warm glow behind the reels as the sun sets, leaving behind silhouettes of the trees. Other than that, the backdrop is relatively plain.

The cartoon-style reels present various characters, including a smiling meerkat, a hippo, a hyena, a lion, a zebra and a baboon. The graphics are pretty nice and everything comes across crisp and clear, no matter whether you’re playing on desktop PCs or mobile devices. The wild is represented by the lion, who can substitute for all other symbols, apart from the scatter. The lion also doubles any wins it helps to form.

The scatter is represented by the elephant and can reward players with free spins when they land at least three – three elephants result in ten free spins, four results in 15 free spins, and landing a full-house of five will reward you with 20 free spins. All wins will be trebled during the free spins round, and it’s possible to retrigger the feature by landing further scatters.

The Big Game Slot’s minimum bet sits at a reasonable $/€/£0.30 per spin, with the highest possible wager set at a relatively low $/€/£45.00 per spin. The range of stake options leaves the game open to all players from newbies to high rollers.

When you spin the reels, you’ll notice a yellow arrow pointing in your chosen direction. Once settled, a green arrow will begin to spin – where this lands determines what multiplier your win will be subject to. The options include:

The Big Game Slot Game is a decent slot with superb graphics and an overall impressive design. We like the fact that the design works seamlessly across all devices, including those with touchscreen functionality. The free spins round allows you the opportunity to significantly boost your prize point since any resulting wins are trebled.