Home » EYECON » Beat The Bobbies at Tower Of London

Beat The Bobbies: At The Tower Of London Game Review 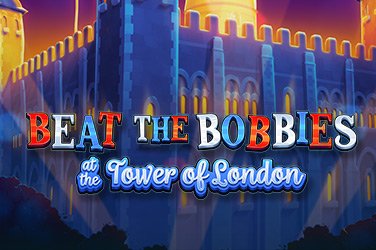 Master thief Penny is back for another adventure in this sequel to fan favourite Beat The Bobbies and this time she’ll need every ounce of skill and luck to rob the most tempting target of all: The Crown Jewels.

The comedy crime caper is one of the great traditions of British cinema, and just about every character you’ll recognise from those classic comedies of the 50s and 60s makes an appearance here: The bumbling policemen, the crafty young damsel, the feisty old lady and even a comedy dog. Fans of the original will recognise many of the symbols used in this game, and this sequel looks just as good as the first one, with a cartoonish style that is nevertheless drawn and rendered well to bring the whole theme together. The big difference is the setting, which places this game firmly at the ancient Tower of London, whose huge stone edifice makes for the backdrop to the reels.

All the symbols are unique and include Beefeater guards, diamonds, emerald earrings, a crown and a tiara. As you might expect, the characters make up the lower value symbols while the jewels are worth the most, while the policemen are the wilds.

The Beat The Bobbies: At The Tower Of London slot game is a five-reel, three-row slot, but boasts a tasty 243 ways to win, so expect the successes to come thick and fast as you play. That’s a very good thing too, because the betting limits aren’t all that generous, falling between £/$/€0.25 and £/$/€50 and with an overall RTP of 95%. That means you’ll have to bet big and take your chances when they arise.

The payouts aren’t all that great in the main game either, with the highest paying symbol being the diamond, which pays out just 40x your stake. Thankfully there’s a bonus round to make up for it, where you could seriously boost your winnings.

Keep an eye out for Penny, the expert thief who is behind this little raid, and hope that you can land three or more of her to activate the free spins round. You’re given a choice of five options as you begin the round, with the gist being that you can have more spins with a smaller multiplier or fewer spins with a larger one, which falls between 5 spins for 10x and 20 spins with a 2x multiplier. Choose wisely, and you could be raking in a fortune!

While it might seem like bad news for a robber to hear a police car coming, you’ll want that to happen in this game, because the police car randomly shows up on the reels sometimes and grants you a spot prize there and then!

This charming crime caper is a lovely bit of fun, and manages to pull off its theme with good humour and cheery visuals so that you might forget you’re trying to win a fortune! The payouts in the main game are a little disappointing, but you’ll soon forget about that if you manage to do well in the bonus round where the real money is to be made!