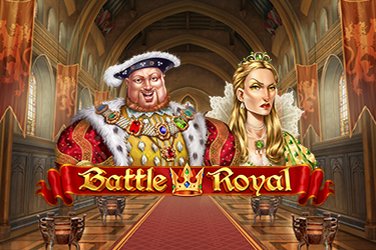 It’s time to take a rare trip back to the court of Henry VIII in this Play N Go slot, where you’ll have to navigate the tricky politics of the time to get away with the gold! This great looking slot is up there with the developer’s best and combines great-looking visuals, an amusing concept, and novel mechanics to make this a slot fit for a king.

So will you be happy and glorious, or will you lose your head? Let’s take a look in our Battle Royal Review!

You don’t need us to tell you about Henry VIII, so needless to say everything you’d expect is there: The magnificent Tudor palace, the flickering braziers, the sumptuous fabrics and the unhappy collection of long-suffering wives. Needless to say, the slot looks and sounds great thanks to its appropriately grand music, and while the generic card suits that represent the low-value symbols is disappointing, they’ve put lots of effort into the higher value symbols, represented by the famous king’s six wives.

With five reels and 20 paylines, the base game is pretty traditional, so you’ll want to get to the bonus rounds as quickly as you can. This is achieved by landing a coat of arms scatter on reels one and five at the same time, though bear in mind that there is also a wild in play represented by Henry himself, who will automatically boost winning combos that feature him. This increases to 30x your stake with a 5x combo! With a minimum bet of £/€/$0.20 and a maximum bet of £/€/$100, the RTP comes in at 96.56%, meaning there’s a lot of cash to be made.

The game offers 3 different types of bonuses, with the biggest wins coming from the scatter symbol (coat of arms) landing on reels 1 and 5 at the same time. The bonus rounds are where the fun really starts, and it’s clear that Play N Go have put a lot of thought into them. On landing your scatters, you are asked to pick one of them at random, which will take you to either the Free Spins or Long Live the King feature. At the beginning of free spins, you’re asked to choose one of the six wives, and at the end of each spin, an axe will fall through one of the reels at random. If one of the wives’ symbols is in that reel they’ll be beheaded, becoming a ghostly green wild instead. This continues until only one wife is left, and if it’s the one you picked then you’ll get an extra cash prize.

At the conclusion of this round, a final axe will fall on a random reel, and if your wife survives you’ll be dumped back into the main game. However, if the last wife is beheaded, a grateful Henry will help you escape with him through his treasure-filled dungeon. Inside, chests will reveal random cash prizes while Henry attempts to dodge the vengeful ghosts of his spouses until he is eventually caught and the round ends. That is unless you happen to reveal a key from one of the chests, in which case you’ll escape and be rewarded with a random multiplier on all the money you won in the bonus rounds!

The Battle Royal slot game is a rather satirical game, based on one of the most infamous kings of British history. Play N go have managed to construct an impressive game from this king’s brutality. Battle Royal has that perfect combination of fun, excitement and reward that we all look for in slot games. It is visually impressive and has some really inventive and highly crafted bonus rounds – even up to 5,000x your original stake! This game really has the potential to make you rich as a king too!