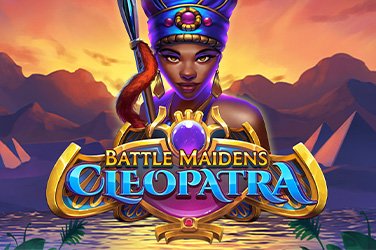 Battle Maidens: Cleopatra celebrates the epic adventures of some kick-ass warrior women in the timeless world of Ancient Egypt, as they gather from their own place and time to fight alongside the notorious Egyptian ruler Cleopatra.

Greek, Amazonian and Native American looking fighters litter the reels alongside more familiar Egyptian looking treasures, as well as Cleo herself, but will you be victorious in this fight or will your achievements be lost to history? Let’s find out in our Battle Maidens: Cleopatra review.

Despite a rather shaky grasp on history, or indeed what these women have teamed up to fight in the first place, Battle Maidens: Cleopatra does a great job of setting the scene. You’ll feel right at home among the Sphinx statues, jewelled scarabs, golden ankhs and sarcophagi that are so familiar in modern slot games, while the presence of those scary-looking warrior women adds a bit of novelty to the setting. The graphics are superbly drawn and the backgrounds are very atmospheric, changing from scorching sun to deep night as you play, while fun little animations and a booming Egyptian soundtrack really help immerse you in this game’s world. While it’s unfortunate that the lower value symbols are the generic 9 – A, you can’t deny that the game ends up looking great anyway.

The first thing you’ll notice about the gameplay in the Battle Maidens: Cleopatra slot game is that it employs a 1024 ways to win feature, so you can expect a tide of smaller wins to come your way even if the relatively low betting limit of £/€/$25 does restrict your big wins a bit. Patience is the name of the game here then, as players look to build healthy prize funds rather than hit the jackpot, though the top paying symbol of the Sphinx still offers 50x your wager. The warrior women are the wilds in this game, and they’ll play a big role in the bonus rounds, but they still pay pretty nicely in the main game and substitute for other symbols to generate wins. The overall RTP in this game is 96.4%, and with a 10,000x jackpot to chase after you’ll be well advised to bet high!

It gets a little complicated when you head into the bonuses, but these are easy to activate at least, requiring only one wild and the Cleopatra scatter to land at the same time to activate the free spins. Each warrior woman wild has a separate power that is activated when they land and that you’ll benefit from during the free spins, including: a 2x multiplier, becoming a sticky wild, adding 1x to existing multipliers, expanding to fill the reel, and adding another free spin. There is also another scatter in this game, The Eye of Horus, which transforms four other symbols into random wilds when it lands.

Battle Maidens: Cleopatra is a slot that uses its bonuses to great effect and makes the theme feel like more than just set dressing. You’ll be willing those warriors to land on the reels and give you those amazing bonus powers, as well as the awesome cash prizes that come with them, so you can have a shot at that 10,000x jackpot!