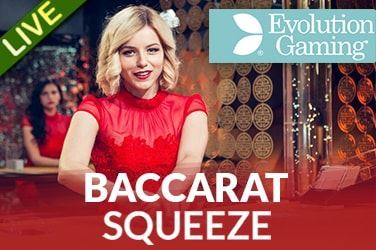 Baccarat is a very fun game in its own right, but there are several variations of the game that give each spin-off its own unique identity that appeals to all segments of the market. One of those is Baccarat Squeeze, which adds an extra element of tension and intrigue via a segment of the game that is at the heartbeat of the action. Let’s dive into our Baccarat Squeeze overview to find out a little bit more and to see if it could be the game for you…

As far as the rules are concerned, the objective of Baccarat Squeeze is no detraction from traditional baccarat, where players have to bet on which pair of cards will have the combination that is closest to the number 9. You have two potential pairs of cards to bet on, either the “player” hand, or the “banker” hand. This differs from games such as blackjack and three card poker where you typically can only bet on one hand against a dealer’s hand.

All playing cards have a value that corresponds to the number on the card. For example, sevens are worth seven, eights are worth eight, and so on. However, whereas in other card games where picture cards have a numerical value of 10, in baccarat – and subsequently Baccarat Squeeze – they have a value of 0. Therefore, if you have a king of clubs and a 2 of spades, your final value is 2, as opposed to 12, which makes it an undesirable combination when you’re looking to get as close as you can to 9.

Now, where Baccarat Squeeze comes into its own is in the revealing of the cards.

The highest-staking player on any given side has the option to choose how the cards are revealed, whether that be a slow action, or something slightly more fast-paced. It’s also worth mentioning at this point that any deck of playing cards used for baccarat is never used twice, meaning that cards can be crumpled and squeezed during the reveal, hence the name Baccarat Squeeze. This adds an element of control to the players and translates particularly well to online casinos that largely consist of faceless players. The “squeeze” gives players an identity and the reveal of the cards can be different from hand to hand, delivering a little bit of theatre to proceedings.

If you’ve been playing baccarat for a long time, one thing you may not like about the gaming experience is the relative monotony of the game from round to round. The pace of the game stays pretty much the same through the session and there isn’t quite the drama of, say, roulette or poker. That said, Baccarat Squeeze gives the game a whole new dimension, and the added tenson it delivers through slow, incremental reveals of the playing cards really does elevate the intensity of the game and somehow makes baccarat even more immersive!