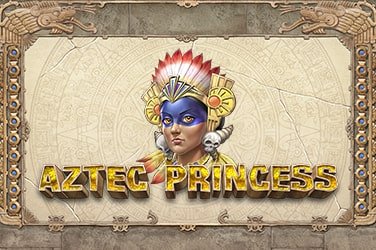 With a Return to Player (RTP) of 96.08%, the Aztec Warrior Princess Slot Game is considered a medium volatility slot.

The Aztec Warrior Princess Slot Game is a jungle-themed slot, set deep within the South American jungle which is home to incredible wildlife. The tribal patterned reels are encased in an ornate border, with jungle greenery visible in the screen’s corners.

Symbols-wise, you’ll find patterned playing card royals – 10, J, Q, K and A – alongside themed symbols including a deadly frog, an eagle, a dragon, and a jaguar. These all offer lucrative rewards when they appear on the reels.

This Aztec Warrior Princess Slot Game’s minimum bet is set at a low $/€/£00.20, whilst there is a reasonable upper bet limit of $/€/£100.00 per spin. This extensive stake range leaves the game open to all players, whether they’re new to online slots or consider themselves a high roller.

There are two bonus features in the Aztec Warrior Princess Slot Game – free spins, and the ‘Pick a Skull’ bonus game.

The free spins round is the main bonus feature and can be unlocked when you land three or more Aztec Princess symbols. You’ll be rewarded with between 15 and 25 free spins, throughout which the princess will act as a wild. There aren’t any additional benefits such as multipliers, sticky wilds or expanding wilds throughout the feature, so you’ll need to build winning combinations in the usual way.

The ‘Pick a Skull’ bonus game is an interesting addition that can be triggered whenever three of the bejewelled skulls land in any base game position. When it starts, you’ll be transported to an Aztec temple and presented with four skulls to select from. Choose one, and see it be placed on a pedestal, with the mud falling away to reveal the skull underneath. The remaining three skulls will disappear, and you’ll be presented with another four to choose from.

The Aztec Warrior Princess Slot Game is a solid game with an excellent design and impressive imagery. The free spins and bonus pick features add excitement to the game, though we would’ve liked to see a few more unique features added to the game, too. Overall, it’s a decent game which is worth taking for a spin.