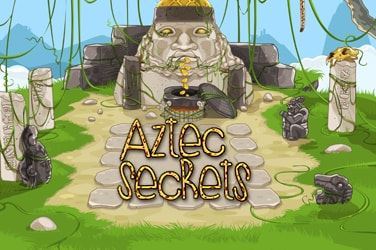 We’re heading back to the time of native America for this next slot, but instead of following the Inca trail or visiting the Maya, we’re on the hunt for their northern neighbours, the Aztecs. Few civilizations around the world have generated as much rumour and misunderstanding in such a short history, thanks to the amazing carvings and fantastical cities they left behind.

Famous for their gold and treasure as much as their mystery, will the Aztec Secrets slot game give up either to the player? Let’s take a look in our Aztec Secrets review.

The cartoon design used in the Aztec Secrets slot game is nevertheless quite effective, rewarding players with mountains of colour, thoughtful illustration and some really high-quality symbols. The low-value symbols may be the generic 9 – A icons, but even these have had a lot of time spent on them, with the numbers and letters depicted as traditional Aztec pictograms. The high-value symbols, on the other hand, are works of art: A pyramid, a bird, a two-headed snake, a skull wreathed in vines and an Aztec chief all look amazing, with a great deal of detail poured into each one. A golden totem represents the wild in this game, while separate bonus and scatter symbols represented by a golden sun mask and a feathered serpent spice up the action.

Betting ranges from £/€/$0.25 to £/€/$62.50 so it’s relatively generous with its limits, but don’t worry if you’re a high roller, because the prizes can be pretty hefty regardless. The lowest win with a valuable symbol is 20x your stake, while you win 10x your stake just for landing one chief symbol on the reels. The cash tops out at 2,500x your stake for five chief symbols, which is very nice for a game that doesn’t expect you to break the bank with each spin. As evidence, check out the RTP of 97.50%, which is one of the highest available on the market today!

This game is pretty lucrative in its normal rounds, so don’t expect as much excitement in the bonuses, but there are still two of them, which is pretty fun. The first is activated by landing three or more bonus symbols, and takes you to a basic pick and win game on a field of stones under the gaze of a giant stone head. Turn over the stones to win cash, which spits out of the head’s mouth, until you find the collect stone to end the round.

The second bonus round is a standard free spins game, granting 10 spins for finding three or more scatter symbols. All of your wins in this round will be generated with the benefit of a 2x multiplier, which can mean really big wins if you land some of the higher value symbols, though you can’t trigger more free spins while you’re in the bonus game.

Aztec Secrets surprised us because it can look deceptively simple at first. While it doesn’t have a lot of the wacky bells and whistles that a lot of modern slots have, it does the basics well: Great art and design, fun bonuses and good payouts. What more can you ask for? With a very high RTP and some massive prizes at the top end, you might even get rich too!