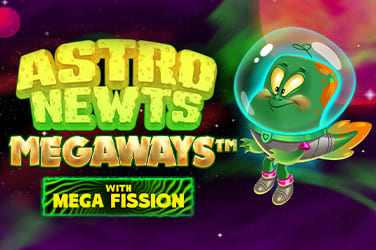 ‘Mega Fission’ is just one of the special Astro Newts Megaways Bonuses to have been implemented in this game.

Check out this Astro Newts Megaways Review to learn what other features this game has and why it is popular amongst Casino77 players!

Astro Newts Megaways Slot Game is a creation provided to Casino77 players by Iron Dog Studios and one that will send them out to space on an epic and incredibly fun adventure.

The visuals and graphics provided are of an exceptional nature as players will immediately feel as though they are in outer space, with the background featuring the many stars that would be found when exploring the galaxy.

A 6 reel playing grid has been provided with each reel having the possibility of holding between 2 and 7 different icons, thus allowing for up to 117,649 different paylines to be available with each spin. This Astro Newts Megaways Review found that a spin can be placed for a minimum of $/€/£0.10 and $/€/£50 on each turn made.

The fun imagery and graphics adopted in this Astro Newts Megaways slot carry on with regards to the symbols that can be found on the paytable, as each of them has been designed with an element of fun.

The traditional royal playing cards appear as low-value icons, which are then followed by objects more related to the theme laid out by the developer, with asteroids, ray guns, jet packs, and 2 Newts being the icons worth the most. Additionally, there is a spaceship wild symbol that can land on all of the reels except for the very first one.

Iron Dog Studios has packed their Astro Newts Megaways slot title with a plethora of different Bonus features that can all be triggered and help to improve the potential win values achieved.

The most common of the Astro Newts Megaways Bonuses will be the ‘Tumbling Reels’ feature which will happen each time a win is recorded. This will see winning icons be replaced by new icons to try and form additional winning combinations.

Another of the common Astro Newts Megaways Bonuses to feature is the ‘Expanding Wilds’, with these icons appearing on each of the reels (except reel 1) in the form of a green W. When they appear, they will simply expand and fill all positions on the reel.

The ‘Mega Fission’ Bonus feature is an Iron Dog Studios special and it will see winning symbols that appear on 2 or 3 reel height be split into two on a win, therefore increasing the number of ways to win. However, this feature can only work once per symbol.

On any random spin, players are also able to trigger the ‘Pig on the Moon’ Astro Newts Megaways Bonus, which will come via the sleeping pig on the left of the playing grid. This will see either 2 expanding wilds be added, or a total of 4 standard wilds.

The biggest of the Astro Newts Megaways Bonuses is arguably the free spins feature, although this can be rather complicated to begin with. Players will need to collect various symbols in order to trigger different levels, however they will need at least 6 fuel tank icons to trigger the game initially. A total of 8 free spins will then be awarded, with players having to start on the moon level.

Each time 4 or more fuel tank icons are collected in the Bonus feature, the level will change and will see players earn up to 4 additional free spins, as well as the following modifier:

If Casino77 players did not want to wait around to trigger this Astro Newts Megaways Bonus, then they will be able to pay 86x the bet to go straight into the game.

With a number of exceptional Astro Newts Megaways Bonuses available to trigger, it is hardly a surprise that many Casino77 members are already playing this game. With so many opportunities to win some rather lucrative prizes, why not join them on this wacky space adventure and try and get some for yourself?