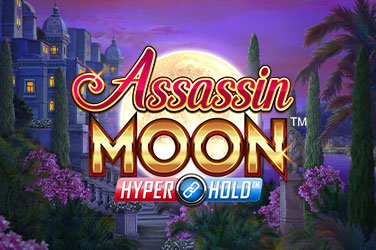 The glamorous game has 25 paylines across its five reels, in addition to the chance to activate several bonuses and land jackpot prizes. The Assassin Moon Slot Game offers high volatility gameplay, with an average Return to Player (RTP) of 96.08% as standard, rising to 96.33% with active boosters. Though wins may be less frequent with a hit frequency rate of 30.49%, there’s the chance to win big with the maximum win being equal to 12,500 times your bet.

The design of the Assassin Moon Slot Game is rather lavish and luxurious, with the aesthetics matching the secret agent theme. Set in Monte Carlo, the accompanying soundtrack enhances the experience further.

The themeing continues with the reels and symbols, which include a pair of dice, a Martini drink with playing cards, a sportscar and A to J royals. You’ll also find the star of the show – mysterious hitwoman, Lola – and the target of the assassination, which you’ll want to land to reap the most rewards with payouts of up to 25 times your total stake.

Land moons for the HyperHold Bonus

Activate the Hyperhold Bonus by landing six or more full moon symbols within the same spin. These will be held, triggering three respins, though the number of respins will be reset to three again if you land a new full moon symbol.

Each moon symbol has a cash value and is worth between one and a half times and 20 times your stake, or has a Mini, Minor, or Major Jackpot attached to it. These jackpots are worth 50 times, 150 times, or 750 times your stake, respectively. Once you come to the end of the free respins, see the values on the moons be added together to award you with your final prize.

There’s also a Mega Jackpot, which can be reached by filling every position with the symbols, and is worth a whopping 5,000 times your total stake.

Boost your chances by activating the Win Booster

Activate the Win Booster feature to increase your chances of landing the HyperHold bonus. It’ll increase the size of your total stake by two and a half times, adding extra moon symbols in the process. Standard payout sizes and moon symbol values will remain unchanged.

To trigger the Free Spins feature within the Assassin Moon Slot Game, you’ll need to land the casino chip. The casino chip is the scatter in this game and landing three of them on reels two, three, and four during the same spin will activate ten Free Spins and award a payout equal to your total stake.

Whilst playing the free spins, the middle three reels will combine, creating a sizeable 3×3 jumbo block, and acting like nine separate symbols. If you land a scatter within this block, you’ll be awarded a further payout as well as an extra ten free spins.

The Assassin Moon Slot Game is fun to play, with high risks but high rewards. The features packed into the game make for an exciting and enjoyable gameplay experience, especially the HyperHold Bonus, which is a refreshing variation of the classic continuous respin.