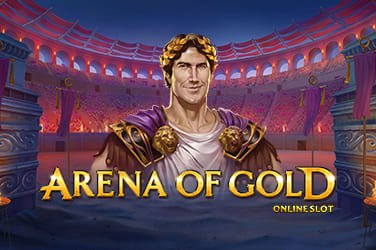 All41Studios and Microgaming created the Arena of Gold Slot Game to bring players a Roman empire-themed slot with excellent bonus features and impressive visuals. The game is compatible with all devices thanks to the fully-optimised design, so you can enjoy the same gameplay experience whether you choose to play on your laptop or smartphone.

With a Return to Player (RTP) of 96.20%, the Arena of Gold Slot Game is considered a medium volatility slot.

The Arena of Gold Slot Game is set in Ancient Rome, with the blurred background behind the reels appearing to be within a Roman amphitheatre or colosseum. Visually, this is an impressive slot, with clear graphics and smooth animations across the five-reel by three-row layout. The title sees players come head-to-head with warriors in the search for big wins.

As with many slots, the lower-paying symbols in the Arena of Gold Slot Game are represented by the playing card royals – J, Q, K and A. Higher paying symbols are in the form of warriors and gladiators wearing lavish clothing and surrounded by gold, silver, bronze or copper weaponry. The red gladiator and Roman emperor symbols are the most rewarding, with the gladiator offering up to 20 times your total stake if you land a full house of five. The emperor symbol is the wild and can substitute for all standard symbols throughout the game.

The golden respin feature can be triggered by landing six or more gold coin symbols in any position. When you do so, the coins will be held and three respins will occur, throughout which the reels will be made up entirely of blank or coin symbols. Other coins that you manage to land will be held, resetting the number of respins to three and continuing the round until no new coins land, or you fill the entire screen with coins.

There’s a cash value attached to all gold coins, with each one able to reward you with between one and 100 times your total stake. There are also Mini and Mega coins which offer 30x and 100x multipliers, respectively. When the respins are finished, all coins’ values will be added together to calculate your payout.

The Arena of Gold Slot Game is a great slot which offers a lot of entertainment through the free spins and golden respin feature. The latter can result in enormous payouts if you manage to fill all 15 positions on the reels with coins, particularly if Mini and Mega coins are included. The visuals are outstanding, with the backdrop and stylised symbols contributing to creating an excellent, solid theme.