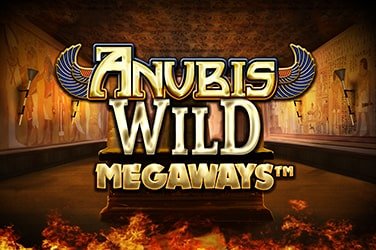 Anubis Wild Megaways is a Megaways slot by Nyx and Blueprint Gaming. The slot is based around Ancient Egypt, which is a theme that has been done many times before but not so much by Megaways. Players spin reels which look like papyrus scrolls, hoping to land matching symbols of pharaohs, Egyptian hieroglyphics, and scarab beetles.

The slot plays against a soundtrack of eerie music, with the sound of faintly flickering flame torches crackling overhead. It certainly builds a certain atmosphere up and makes each spin of Anubis Wild one to remember.

Anubis Wild is a Megaways slot, which means that on each spin there are 117,649 ways to win. Wins are paid out according to a paytable, but they’re also multiplied depending on how many symbols of the winning type are present on the reels during a win.

Special features in the game include mystery symbols which are resolved after all symbols have landed, free spins, and cascading reels. Three or more bonus scatter symbols landing anywhere on the reels during play will trigger the Free Spins bonus round, which awards players 12 free spins minimum, with two further spins added for every extra scatter landing on the reels.

During Free Spins, all wilds which land on the reels drop to the bottom of the reel and lock in for the remaining spins, effectively acting as Sticky Wilds. Filling a reel with locked wilds awards more free spins, and locking two wilds into one place adds a multiplier.

The game also makes use of the popular cascading reels feature, which means that every time a winning combination lands, these symbols disappear and new symbols cascade into their place. Not only does this mean that wins are more likely, but it means players can win multiple times from a single spin.

Anubis Wild Megaways offers an average return to player of 95.81%, which is just a little lower than average. This means that for every £100 players spend on the slot, they can expect to win back about £95.81. It’s also a high variance slot, meaning players should be prepared to play for a while before making back returns – wins are big, but don’t come in often. However, this does make Anubis Wild Megaways a great choice of slot for players who are incentivised by the thought of a windfall.

There are lots of bonus features in Anubis Wild Megaways, but not so much that the game feels crowded. It’s not the most stunning looking slot you’ll ever play, but it’s a fun game which holds the possibility of some big wins further down the line, and this is enough for many slot players to keep spinning.