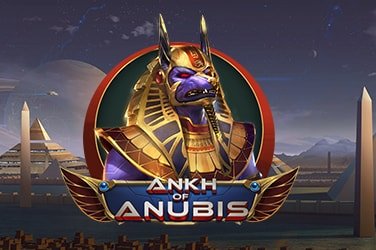 Ankh of Anubis does a decent job of bringing something new to the table in what could have been a run of the mill Egypt slot. Instead, Play’n GO has combined some exciting mechanics with a quirky sci-fi theme to result in something that really does break the mould.

Ankh of Anubis is a ways to win game, this time offering players a massive 576 ways to win. Play happens across five reels in a 3-4-4-3 shape, and wins are awarded for matching lines of symbols. The game’s highest paying symbol is the wild Anubis symbol, which will score players up to 10x their bet for five on a payline. Other symbols include the ankh and the scarab beetle, which pay out up to 5x and 2.5x the bet respectively.

There are a few special features to take advantage of in this interesting slot game. First, Anubis Wilds is a randomly activated feature which adds more wild symbols to the reels to help create more winning combinations.

There’s also a free spins mode which is triggered when players land three or more scatter symbols. During free spins, Anubis will add another wild to the reels for every five ankh symbols that players collect. Landing further scatters during the free spins bonus can also extend the free spins round even longer.

Ankh of Anubis features some pretty classic slot features which have been revamped into something new – a little like the game’s theme.

As a modern online slot, Ankh of Anubis has been designed to run well on mobile devices including smartphones and tablets, which means players who prefer to play on mobile shouldn’t worry about this aspect of the slot.

Ankh of Anubis offers a return to player of 94.2%, which is a little on the low side compared to many online slots. This means that for every £100 players spend playing the game, they can expect to win back £94.20 on average. It’s a high variance game, too, making it only really appropriate for players who are prepared to stomach lots of losses before recouping some money on the reels.

We’ve all seen hundreds of ancient Egyptian slots before, but none quite like this. While the low RTP and ‘been there done that’ theme might be off-putting to some players, many will find something to like in this interesting new take on ancient Egypt. It’s certainly an enjoyable slot and an easy way to pass a few hours every once in a while.