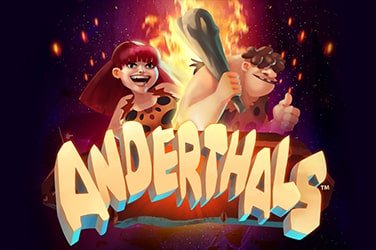 Time to grab a seat by the campfire and a turkey leg as big as your head, in this stone age slot by Swedish developer Just For The Win. They’ve been turning out a lot of slick, shallow slots recently and Anderthals looks to be a return to form for the studio, charting the adventures of cave dwellers Andy and Annie as they dodge dinosaurs and tame fire to survive in a harsh land before time.

Will you be Captain Caveman, or will you be dinosaur food? Let’s take a look in our Anderthals slot game review.

Just For The Win have made good use of modern technology in creating Anderthals, combining cartoonish graphics with clever design and creative artwork to create a slot that is recognisable as having a prehistoric theme. Everything looks to have been cobbled together by early humans, and from the reels lashed together with sticks and vines or the crudely carved symbols, a lot of effort has gone into making this slot look the part. The low-value symbols here are knapped flint card suits, while the high-value symbols include the prehistoric pair Andy and Annie, as well as dinosaurs, burning torches and the Anderthals logo. Accompanying the visuals are some impressive animations as the screen is regularly wreathed in fire, while an energetic tribal soundtrack completes the picture.

Under the hood, there are a few surprises with this slot. For a start, it’s got five reels and four rows as opposed to the usual three, so there are more chances for wins there with 40 paylines to choose from. The Anderthals slot game is classed as a high volatility game, so expect it to go from zero to 60 in no time flat, though the maximum win is capped at £/€/$221,000, so it’s better news for low rollers than it is for high rollers. Betting is between £/€/$0.10 and £/€/$100, so there’s something for cautious and committed players alike, and the RTP sits at a respectable 96.12% so nothing particularly unusual there.

One of the bright spots in this game is the inventive bonus round, which features a variety of potential bonuses depending on where the scatters land. The scatter is a flaming torch, while the bonuses are listed above the reels, and if you land two or more of these scatters during a spin you can play a re-spin with the benefit of the bonuses listed above the reels they landed on. These include bonuses that expand any wilds that land on those reels to bonuses that add extra wilds or add multipliers to the wilds that land on the reel. You also find symbols that automatically award you a multiplier cash prize, or a re-spin or free spin round. While these are all pretty tried and tested bonuses, it’s a clever way of deciding how they’ll be awarded. Land the free spins bonus and you’ll get eight free spins, with another two for every free spins feature activated by the scatters during the spins, while any bonuses you had activated when you landed your free spins will keep being active.

Anderthals isn’t exactly groundbreaking, so don’t expect anything new with this game, but it does have a charming and fun art style as well as innovative and exciting bonuses to bring to the table. You’ll also enjoy the frequency with which you activate the bonuses, which happens quite often, even if it’s hit or miss whether you’ll be able to make the most of what you win.