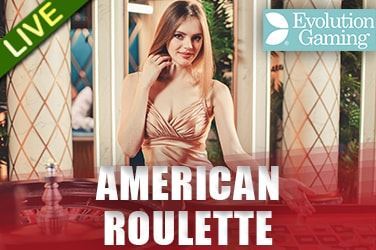 One of the best results of the explosion in online casino gaming in recent years has been the number of variants players are exposed to. You’re not just restricted to the game types found in your local casino, and suddenly you can play European Roulette, American Poker and Single Deck Blackjack along with hundreds of other alternatives without leaving your sofa.

American Roulette Live is another of those variants that European players might not have experienced, bringing a new set of rules to the table, so is this game worth a spin or should it have stayed at home? Let’s take a look.

The basics of American Roulette are pretty like the European version in most ways, with the familiar wheel and table looking more or less the same and the general mechanics being comparable. One major difference is that the American version has an extra pocket, a 00 to go alongside the existing 0 that the European game has, which also results in a completely different layout on the wheel. This also means that some of the most popular set bets in European Roulette, such as the Voisin du Zero, aren’t allowed because they don’t work.

The house edge is also slightly further in favour of the house in American Roulette, which has an RTP of 94.74%, though this can be mitigated by a good strategy to the point where the disadvantage is minimal. However, all these differences pale into insignificance in comparison with the biggest difference that American Roulette Live brings to the table: A live dealer.

Developers Groove have become a specialist in live versions of casino games in recent years, and this is one of their most popular, especially as more and more players move online while craving a similar experience to bricks and mortar casinos. Live Roulette games like this are something of a hybrid experience, offering many of the options you’d get in an online game while being played on an actual table by a human, like in a physical casino. This results in positives and negatives, and in some ways, it’s the best of both worlds, though clearly you don’t get to choose the game speed with a live dealer and there is a betting timer to stick to so it’s not nearly as flexible. You’ll also find the minimum bets are higher because the developers have to factor in the cost of employing a dealer and paying for the physical space it’s played in.

There are no bonuses as this is a faithful recreation of the live Roulette experience, however, there are a few extras that you might not get at a casino. American Roulette Live has a chatbox through which you can interact with the dealer and other players, with many more players able to use a single table at once, and bets can easily be placed using the computer-generated chips at the bottom of the screen.

You’ll also find other helpful tools such as the most recent winning numbers, a tip box for the dealer and live tips to help you make good choices.

A faithful recreation of a classic bricks and mortar casino table game that new and seasoned gamblers alike will enjoy.