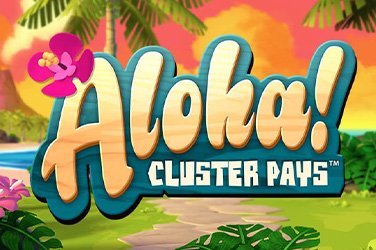 In this Aloha Cluster Pays Slot Game Review, our aim is to give potential bettors all the knowledge and information they’ll need before setting off playing this slot.

Mainly, how the game is played, what the return to player rate is, and if the Aloha Cluster Pays Bonuses (which include both repsins and free spins) make the game an enjoyable and profitable experience.

One of the leading lights in the online slot games market over recent years has been Net Entertainment, who have produced a number of the most popular titles. Aloha Cluster Pays follows the pattern, with everything from the Hawaii themed background to bright and colourful symbols being well designed.

Coin denominations can be adjusted using the coin value section, and you can also amend the number of coins you bet per line. If you are feeling adventurous, there is a max bet function, or equally if you are feeling lazy, the autoplay feature will spin the reels for you without interruption.

While the vast majority of online slot games have just three rows and five reels, with the aim being to match between three and five symbols across the reels, Net Entertainment have gone for something very different here. They’ve given us five rows and six reels, which really makes the game stand out from the crowd.

Given the game is set on the exotic island of Hawaii, the symbols are themed accordingly, with bright pink flowers, tropical fruit and clam shells. The tiki masks are the higher valued symbols which players will hope to match, and helpfully they each cover two normal spots, to increase your chance of winning.

The question mark crate symbol will substitute other non-winning symbols out, to help make winning combinations. These can land anywhere on the reels.

We might run out of space in this Aloha Cluster Pays Slot Game Review trying to include all the bonus features, because there are just so many. One of the aims of the game is to make clusters of nine matching symbols, which will trigger the Sticky Wins respins. The cluster will stay in place, as all the other symbols respin, increasing your chance of a big win. The game will continue to respin until no more new combinations are made.

There is also a free spin bonus. Landing three to six of the free spin symbols will reward players with nine to twelve spins, whilst more free spins can be won during the feature if more of the symbols appear.

The return to player rate for Aloha Cluster Pays Slot Game is 96.42%, which is slightly higher than the average online slot game that we tend to see.

Unsurprisingly, Net Entertainment has made another thoroughly enjoyable title. Given how many slot games are so similar, this one really stands out with its unique reels and methods of winning. The Aloha Cluster Pays Bonuses can also lead to some great prizes, so whether you’re a novice or experienced bettor, you’ll have a great time with this game.