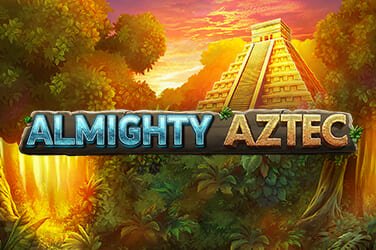 The Aztec Empire has long fascinated historians and amateurs alike, a civilization that was able to build vast pyramids and impressive road and canal networks when many cultures in Europe and around the world barely had stone buildings.

Their buildings, their amazing golden artefacts and their complex mythology all play a part in the Almighty Aztec slot by Spin Play Games, showing the Aztecs at their height before infighting and European invasion brought their empire to an end. But will you please the gods, or are you the next sacrifice? Let’s take a look at our Almighty Aztec slot game review.

Almighty Aztec is certainly a bright and colourful slot, taking your thoughts straight to the sun-drenched plains of Mexico and all the way down to the deep, leafy jungles of Guatemala. This slot most definitely goes for the jungle option in the southern portion of the Aztec Empire, and the background to the reels is a thick jungle canopy filled with succulent leaves. The reels themselves are hosted on a traditional Aztec stone stepped pyramid, while the feathered serpent Quetzalcoatl hovers to the left of the screen and monitors your progress. The symbols are nice and diverse, with the low-value icons represented by various coloured stones and the high-value ones represented by symbols including golden snakes, carved stone tablets, brightly coloured birds and even an Aztec warrior. A soulful panpipe soundtrack plays in the background, while subtle animations make the game come alive.

The Almighty Aztec slot game advertises itself as a lower-stakes slot, so you know sort of what you’re getting into when you play, but it means you’ll be getting pretty frequent wins without ever winning too much in one go. Having said that, the betting limit in this game is pretty enormous, topping out at £/€/$500 per spin. So while the highest you can win in the main game is 50x your bet for five Aztec warriors, that’s a pretty serious amount still if you’re betting high! You also get the benefit of expanding wilds in this game, and whenever one of the sun wilds lands on the reels it expands to take up the whole reel to generate even better wins. The total result is a pretty high RTP of 96.38%, which fits with the low stakes ethos the game comes with. As an added bonus the feathered serpent Quetzalcoatl stops by at random to fly across the reels and drop up to three extra wilds.

That’s already a decent number of bonuses for a game that’s supposed to be low stakes, and the calendar scatter grants you an extra one: Land up to five on the reels for up to 12 free spins, which are pretty similar to the main game except that the wilds are sticky when they land and stay in place for the rest of the spins.

Almighty Aztec is a great looking game that is perfect for low stakes players who want a bit of excitement without risking too much of their hard-earned cash. It’s got a pretty high RTP, but don’t be fooled into thinking that there’s no cash to be won, because a hatful of bonus features mean that you might still hit the big time.