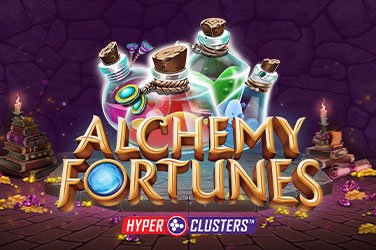 All41 Studio’s Alchemy Fortunes is a potion-laden slot with a monster 7×7 playboard with an array of falling concoctions and precious stones in a cluster arrangement that is off the beaten track of traditional slot games that feature your more traditional spinning wheels.

But how do those elements play out for punters? Let’s take a look at the Alchemy Fortunes review to find out.

Players are taken to the furthest depths of an alchemist’s dungeon on their way to the huge 7×7 playboard that gives us 49 chances to match up a combination of potions and gems. While there is plenty of colour going on, the visuals aren’t too much of a problem on the eyes and the symbols are delicate enough so that you don’t have to squint your eyes with each spin!

The game itself offers seven paylines with a high volatility, so players who like the regular buzz of small wins may find themselves slightly underwhelmed by the regularity of prizes, but for the grinders out there who like to burrow away for the big money, this could well be your cup of tea.

In terms of minimum and maximum stakes, slow-burning players can place a bet for as little as $€£0.20, but more high-octane punters can stake as much as $€£100 per spin.

For all slot games, it’s vitally important to get the balance right on RTP and Alchemy Fortunes certainly does that with a rate of just under 96.5%, placing it firmly in the “above average” category.

The Alchemy Fortunes soundtrack is rather subtle but has an element of mystery that ties in well with the overall aesthetic of the game. Wins of all sizes deliver a bonus sound that is reminiscent of a magician’s spell and is a nice touch.

In order to pick up the basic wins, all players have to do is match up five adjacent matching symbols, either vertically, horizontally, or a combination of the two. Symbol swaps are also on offer for bigger matches and their bonuses can be very lucrative, depending on the original symbol that has been matched. A number of further bonus features are available, based on the accumulation of matching symbols, rather than traditional one-off combinations, which will appeal to players who like to stick to a single slot for their spinning sessions.

Alchemy Fortunes is a much slower-paced slot game when compared to others on the market but its engaging format and whopping playboard means that you aren’t left biding your time between spins. Cynics might call this a no-frills slot but with Alchemy Slots the devil is in the detail, with well-crafted symbols and a solid soundtrack that go together to create an immersive gaming experience, while its high volatility creates a gripping unpredictability that left us wanting more.