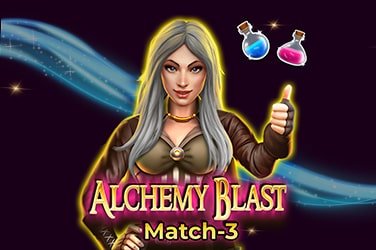 The Alchemy Blast Slot Game is brought to you by Skillzz Gaming. It’s a six-reel, five-row video slot with a maximum win of 1,000 times your total stake per spin, and features an exciting cluster pays gaming engine.

With a Return to Player (RTP) of 95.05%, the Alchemy Blast Slot Game is considered a medium volatility slot. The game’s fully optimised design allows for complete compatibility across your devices, including touchscreen smartphones and tablets.

The Alchemy Blast Slot Game welcomes you to the Alchemy Academy, where headmistress Lita Flamel is ready to take you through the game. The reels are presented in a grid above a bubbling cauldron where various elixirs and potions are mixed. You’ll notice different colour element bars that can be filled multiple times to land prize multipliers worth between 0.5 and ten times your stake.

To fill the element bars, you’ll need to select clusters of three or more matching coloured symbols to blast them off the reels. Each symbol varies in value, with red, blue, pink, green and yellow symbols worth multipliers of 0.5, one, two, five and ten times, respectively.

Look out for the Philosopher’s Stone symbol appearing at any time during the base game – you’ll need to zap a cluster of matching icons underneath it to unlock the maximum win of 1,000 times your stake.

The Alchemy Blast Slot Game’s minimum bet is set at a relatively high $/€/£00.80, whilst there is an upper bet limit of $/€/£100.00. The fairly high minimum bet option might make this game unsuitable for those who are new to the world of online slots and not looking to stake too much.

The elixir of magic, wisdom or immortality

When each round begins, you’ll be able to select your primary elixir symbol on-screen. This will keep moving around the grid each time you blast away a cluster of matching symbols, improving your chances of collecting its kind.

The blue elixir of magic will unlock the mystery box bonus, where you’ll need to select from the vials on the screen to reveal a multiplier. This continues until you uncover a poison charm, which will end the round.

You’ll need to collect two pink elixirs of wisdom to trigger entry to the Wisdom Library. Once you’re in, you’ll need to grab as may multiplier-awarding books as you can to boost your win. Watch out for the cursed book, as if you select this, the round will end.

The third and final elixir is the green elixir of immortality. You’ll need to collect three of these to be rewarded with five free rounds, throughout which you can blast elements under multiplier symbols to be rewarded accordingly.

The Alchemy Blast Slot Game is an interesting slot that offers a lot in the way of entertainment. If you’re not a fan of the traditional slot gaming engine and prefer games like Candy Crush Saga, you’ll love the design of Alchemy Blast. The graphics are superb, and animations are smooth, and the accompanying sound effects add to the excitement. The elixir bonus features offer excellent opportunities to boost your prize pot.