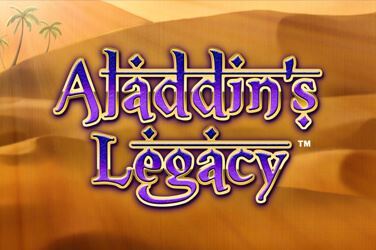 Arabia has a reputation for being one of the most romantic, but also one of the harshest, places on earth. No story speaks to the sweet and sour elements of Arabian legend than Aladdin, one of the stories of the 1001 Nights, where a lowly thief takes the help of a genie to win the hand of the richest and most beautiful princess in the land.

If rags to riches stories are what got you playing slot games in the first place, where better to start than the most famous one of all? But is Aladdin’s Legacy a fairy tale or a nightmare? Let’s take a look at our Aladdin’s Legacy review.

The fantasy world of Aladdin’s Arabia is so famous that you probably already know what to expect: Market stalls, gorgeous onion-domed buildings, gold and mosaic tiles as far as the eye can see, the hustle and bustle of traders and hagglers filling the streets. You get all that and more in Aladdin’s Legacy, thanks to colourful and stylish visuals backed up by a jangling Arabian inspired soundtrack. The graphics are good, and while the use of generic 9 – A symbols is a little disappointing, the high-value symbols are all very atmospheric, featuring mysterious Arab warriors, market scenes, oases and magic lamps. There are even cute little animations when combos are completed, and we love the inclusion of Aladdin’s pet monkey in one of them.

There’s nothing particularly mysterious about the mechanics in this game, which is played on a standard-issue five-reel and three-row layout with twenty paylines, but the payouts are anything but forgettable. The biggest paying symbol, the magic carpet wild, gives up an incredible 2500x your stake, and when you consider that the maximum possible bet is a mammoth £/€/$500 you realize you’re looking at some potentially massive wins at stake. The RTP for this slot is only 95%, which is distinctly average, so you’ll have to get into some of those bigger bets in order to win serious cash! However, there is also a bonus round to consider, which can change your fortunes in an instant just like a magic lamp!

The first of these bonuses is a fairly standard free spins round activated by landing the magic lamp scatters in the usual way, with three giving you 10 free spins while five will award you 20. This is nice and rewarding, but there aren’t any multipliers of extras to spice this part of the game up, which is where the cave wild comes in. The cave is a new wild added during the free spins round, and when it lands on reel five you get the opportunity to pick gems in the door. Pick the right ones, and you enter the treasure room to claim your prizes.

We don’t go to The Arabian Nights often enough in slot games, so the Aladdin’s Legacy slot game is a welcome treat, using great graphics and sound to really set the scene and take players far away. A very high betting limit and some big prizes further add to the feeling of being given a wish-granting lamp, and there’s every chance your wish for riches will be granted in this slot!