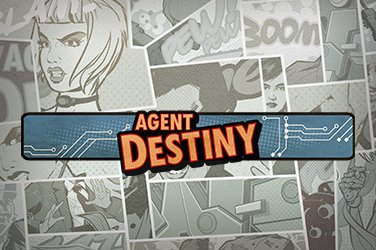 Developed by Play ‘n’ Go, the Agent Destiny Slot Game is a visually impressive five-reel, three-row video slot with 20 paylines and the chance to win up to 5,000 times your stake. The design of this spy-themed game is optimised for all devices, so you can enjoy a seamless experience whether you choose to play on a desktop computer or your smartphone.

With a Return to Player (RTP) of 96.26%, the Agent Destiny Slot Game is considered a high volatility slot.

The Agent Destiny Slot Game is based around a spy – Agent Destiny – trying to keep everyone safe from the masterminds who are attempting to take over the world. The visuals are superb, with comic strip artwork visible in the background of the game. Animations are smooth, and the accompanying soundtrack adds excitement to the game.

Symbols-wise, you’ll find the usual low-paying playing card royals – J, Q, K and A – alongside Agent Adam, Agent Destiny, and the two mastermind villains – Madam and The Doctor. The latter two are the most rewarding of all standard symbols, offering between one and 15 times your stake when you land between three and five of them to form a winning combination.

The wild within the Agent Destiny Slot Game is represented by a safe with the letter ‘W’ on it; as with most wild symbols, it’ll substitute for all others, except for the scatter. It’s also the highest paying symbol within the game, offering one and a half, three or 60 times your total bet value if you land three, four or five of them.

The Agent Destiny Slot Game’s minimum bet is set at just $/€/£00.10, whilst the highest bet is limited to $/€/£100.00. High-rollers and new online slots players will likely enjoy the range of available stake options, though the high volatility is something to bear in mind.

In the mega symbols feature, all character symbols and the wild will appear as ‘mega symbols’, varying in size. This will result in the most lucrative wins, given the wild’s high value and winning potential.

The scatter can appear on the first, third and fifth reels to trigger the free spins feature. You’ll initially be rewarded with nine free spins, though landing extra scatters throughout the bonus round will provide you with additional freebies – with no upper limit. The linked reels feature is in-play during every free spin, maximising wins.

The Agent Destiny Slot Game is an entertaining slot with superb graphics and an outstanding design. The theming is strong, and the bonus features offer the chance to land significant wins. The free spins round allows you to boost your prize pot with the opportunity to win up to 1,200 times your stake per spin.