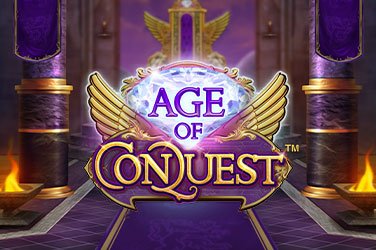 Microgaming is a studio famous for its blockbuster content, and they don’t disappoint with Age of Conquest, which has to be one of the best looking slot games out there at the moment. This is a game very much in the tradition of the latest titles, full of amazing animation and gorgeous graphics that will really help build the fantasy medieval world you’re playing in. It’s got proper swords and sorcery stuff, with a huge chunk of cash thrown in to boot.

So is this game next in line for the throne, or will you feel disinherited? Let’s take a look in our Age of Conquest review.

The Age of Conquest slot game goes all out with its fantasy design, with no expense spared on the symbol design and animation. Everything seems to flicker and glow throughout the game, from the burning torches to either side of the reels to the high-value symbols represented by flaming swords, neon glowing potions, magical steeds and a pair of elven looking knights that flash and smoulder when you make winning combos. There’s no doubt that you’re in a fantasy setting from the background, which depicts a snowbound castle amid lofty mountains, and it’s not long before the magic shows up.

The low-value symbols are represented by the 10 – A symbols, though these too are designed to look like medieval calligraphy, while the highest two symbols are an elven knight and an elven sorceress. These two can appear either as single symbols or as full height stacked symbols that take up a whole reel and can help you make larger combos. These two can rake in 15x and 10x your stake respectively if you manage a combo of five, though the best symbol to land is the wild, which grants 50x with five in a row. It’s mildly disappointing to see that this is just the word ‘wild’ in gold script, but it does the job.

While it looks fantastic, this is about it for surprises in the base game. It’s got a traditional layout of 5 reels and 3 rows with 20 paylines, though one thing which may impress high rollers is the ability to bet anything from £/€/$0.20p all the way up to £/€/$200, which suddenly makes that 50x multiplier even more interesting! It all adds up to an RTP of 96.14%, which isn’t bad for a modern game.

There are a couple of bonus rounds in this game to up the ante even more, a power meter and free spins feature. Sparkling diamonds fall regularly on the reels, and while they’re not worth anything per se, each reel has a two-slot diamond meter above it. When you fill both slots on the reel, the reel fills with wilds for two spins. Get this on two reels at once for amazing payouts.

The second bonus feature takes the form of a little mini-game, started when you collect three golden throne scatters. Collecting the scatters takes you inside the castle to the throne room in a movie-quality animation sequence, where you get to choose whether you play two free spins with three wilds, eight free spins with two wilds or 25 free spins with one wild. It ultimately depends on the luck of the draw which one is best, but it’s a nice touch that helps you feel in control of your destiny.

It’s without a doubt that Age of Conquest looks great, and no expense has been spared or detail overlooked when it comes to the presentation. The base game is also pretty fun, with some big bets and a couple of interesting features possible to keep you interested. It is somewhat lacking in the bonuses department, which isn’t exactly stuffed with interesting options, so you may be left wondering what all the fuss was about by the end.