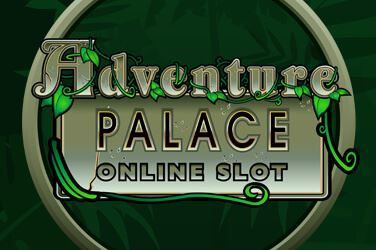 Animals are a sure-fire hit when it comes to slot games, but if you don’t look carefully at Adventure Palace, you might miss out on our furry friends entirely! While this game is set in a lovely mansion deep in the jungle, the real stars of the show are the animals and birds you meet on the way, from snarling tigers and laughing monkeys to inquisitive birds and even an elephant!

So is this game the king of the jungle, or a harmless house cat? Let’s take a look in our Adventure Palace review.

You’ll certainly feel like you’re on an adventure when Adventure Palace fires up because you’re immediately thrust into a dense jungle scene with thick fronds and leaves taking up the entirety of the reel background. The animals we’ve mentioned take centre stage, and while the graphics aren’t exactly amazing, they do a good job of showing off the wonders of the jungle in high detail.

The low-value symbols are the generic 9 – A have been given a makeover in stone, but the collection of Cobras, Tigers, exotic birds and monkeys in the high-value symbols will be more than enough for most people There’s also a gentle drumming soundtrack in the background to help set the scene, alongside a sparkly magic sound when the reels spin.

This is a Microgaming slot, and so it uses a fairly typical layout for slots from that developer, having three rows and five reels with nine pay lines to play on. The betting limit is relatively low at only £/$/€45 per spin, but that’s nothing to sniff at when you consider that the maximum possible jackpot in this slot is 15,000x your stake. It’s still enough to make you rich, however, you look at it! With a relatively generous RTP of 96.1%, there are also decent returns in the main game, so you need not worry about your cash too much. On top of the normal symbols, there is also a wild and a scatter to keep track of: The wild is the bejewelled elephant, and substitutes for other symbols while paying an epic 10,000x your stake for five, while the scatter helps set off the bonus game!

The palace in the Adventure Palace slot game is the scatter, and landing yourself up to five of these can get you 15 free spins, during which all prizes that you win will have their value tripled. It’s not hugely imaginative in comparison to some of Microgaming’s other offerings, but you can’t argue with three times the prize money! If you’re feeling especially brave you can even risk it all on the gamble feature, which allows you to stake double or even quadruple the value of the whole bonus win on the colour of the next card drawn. Be careful though, lose and you lose it all!

We’re a sucker for animal-related slots, and while it’s not exactly the most dynamic or interesting slot games we’ve ever played, the symbols and theme are well done and nicely drawn while the payouts are frequent and generous. There’s also a bonus round and gamble feature to really sweeten the deal, so you’ll definitely want to book your stay at the Adventure Palace soon!