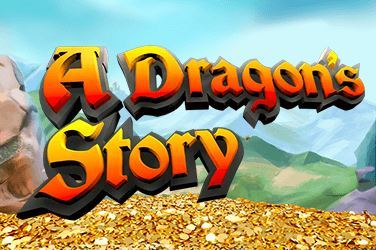 The A Dragon’s Story slot game is another in the many titles that was released by the people at NextGen Gaming. The game has been on the market since March 2016 so it is one of the more modern machines.

The thing that jumps out at you when you load this game up is the wonderful cartoon graphics where the main character sits to the right of the reels. A Dragons Story has an interface which is very easy to navigate and there is a fun background noise to it too. You can play A Dragons Story across all desktop, mobile or tablet devices.

This cartoon designed game has a medieval theme to it and sees us on the side of Ruff the dragon. He is aiming to protect his treasure from Sir William and it is our job to help him. A Dragons Story has five reels and as many as 25 paylines with a maximum win of 2,000x your original stake. There is a volatility to this slot which is on the medium to high side.

As with most NextGen Gaming slots, there are a number of icons in play in A Dragons Story. The lower paying ones are the typical playing card symbols – 9, 10, J, Q, K and A, while the better-paying ones include the golden treasure, Sir William, his lion pictured shield and a metal boot. The Wild is the dragon and the Scatter is the jewel.

There are a few features in the A Dragons Story slot game. The first one to note is the SuperBet feature which is an added bet that can be controlled to the right of the reels. If you choose to use this feature it will cost you more per spin but you get rewarded with the Little Dragons enhanced on some of the reels.

There is also a Free Spins feature where three Scatter icons will launch the game. You immediately receive 10 free spins during which all wins are doubled. Little Dragons enhance the reels throughout the feature as well and it can be retriggered so you can get up to 20 spins in total.

The final feature is the Sir William one. This randomly activates itself after a winning spin and sees Sir William attempting to steal the riches of Ruff the dragon. You get to choose a fireball to stop him. That is breathed on Sir William and the further his treasure drops the more you win!

There are two RTP ratings for the A Dragons Story slot game. The base game without the SuperBet activation has a rating of 95.23% whereas with the maximum SuperBet in play it goes up to 95.62%. Both are below the average for a game of this kind.

As something a bit different, A Dragons Story is a very enjoyable game. The features don’t always provide the biggest wins but they are activated fairly regularly, and the gameplay of trying to stop Sir William taking all of Ruff’s riches is quite an entertaining one throughout the period of play. Everything is neatly set out in this game with clear, clean graphics and a well-designed machine.