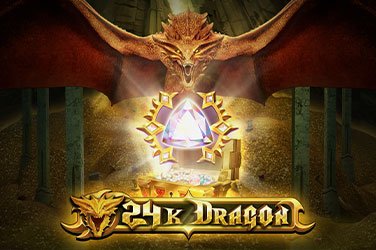 Many slots players might feel a bit of a connection to dragons, after all, who wouldn’t want a mountain of gold and jewels to look after? Maybe that’s why dragon-related slots are so popular? 24k Dragon promises to be the most valuable of its kind, but just like one of the mythical beasts themselves, players should beware of its clever tricks and its fiery temper.

One wrong move could cost you everything, but you’re just one spin away from a true dragon’s hoard! So is this game a legend, or is it just a tall tale? Let’s take a look in our 24k Dragon slot game review.

The 24k Dragon slot game doesn’t pull any punches with its theme, and there doesn’t look to be a surface or symbol in this whole game that‘s not dragon-themed or made of some precious metal. A sea of coins and jewels forms the backdrop, and presumably the dragon’s bed, while pointy scales and dragon heads form the frame around the reels. The low-value symbols are slightly underwhelming, comprising the 9 – A given spiky draconic makeovers, but the high-value symbols look the business: Glowing crystals, piles of gold and weapons and a cool looking lion’s head. There is also a suitably epic fantasy soundtrack and some cool animations as combos cause sparks and flames to fly across the screen.

As with most 1024 ways to win slots this game promises lots of payouts rather than large payouts, and whether or not you like that style is up to you to decide. The top bet is nice enough, at £/€/$100 per spin, though the top paying golden dragon symbol only attracts 5x your wager for five in a row. Don’t worry though, as wins are frequent enough to make that a perfectly decent number, and you can take the above-average RTP of 96.2% as evidence. This is also improved somewhat by the presence of the treasure chest wilds, which not only complete combos but also grant up to 4x multipliers for the whole spin.

There are a couple of bonuses to consider in this game, the first of which involves that golden dragon we mentioned earlier: Every time it lands on the reels you get a re-spin with a random one to four rows added to the grid. You can also collect these dragons during the free spins, triggered by landing up to 5 diamond scatters for up to 20 free spins. Collecting 3, 7, 11 and 15 increases the number of rows and win ways respectively up to a maximum of four rows and 8,192 ways to win. The wilds also stack in the bonus rounds, so every wild you win on a spin multiplies together to allow a possible maximum multiplier of 64x the win.

Not only does 24k Dragon look the part, thanks to bombastic visuals and an epic soundtrack, there are also tons and tons of opportunities to win yourself some treasure thanks to the extra bonuses. The goodies just keep on coming as you build more and more ways to win until eventually, you’ll be overflowing with gold!