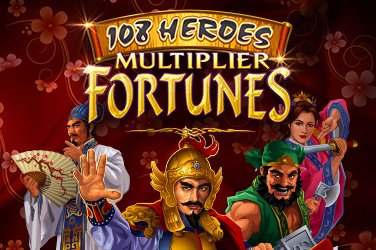 The booming market for slot games in East Asia has created all kinds of weird and wonderful games, to Western eyes at least, that may not make a lick of sense to non-native gamers but are still great fun to play.

108 Heroes is exactly that, and while the intricacies of the story might be lost on you, it’s hard not to appreciate the excellent visuals and the exciting gameplay, or even just the decent payouts and generous bonuses! So is 108 Heroes coming to save you, or is it a letdown? Let’s find out in our 108 Heroes review.

Set against a backdrop of serene cherry blossoms and the interior of a grand Chinese palace, 108 Heroes introduces us to a vibrant cast of characters all drawn from Medieval Chinese legend, including muscle-bound warriors, angry-looking pirates, savage warrior women and axe-wielding monks. It’s fair to assume that these guys are the heroes from the title, and they certainly mean business.

The characters on screen represent the high paying symbols, while the lower-paying icons are represented by the standard 9 – A symbols given a red and gold makeover. As you might expect, there is also a cheerful traditional Chinese soundtrack in the background to further set the scene.

I hope you’re sitting down for this next bit because we’ve got some big numbers to throw at you. The top-paying symbol, a warrior in golden armour, pays 2500x your stake while the second highest paying symbol grants 1250x your stake. That’s pretty good, and with the betting limit set at a fairly high £/€/$75, that’s an awful lot of cash on its own, but then comes the ‘108 Heroes’ wild. Five of these symbols in a line will net you a mind-boggling 37,500x your stake, while even four will get you 10,000x what you originally bet. Betting at maximum and that’s a whole lot of cash! No wonder the RTP is a generous 96.56%!

Landing the Chinese character scatter symbols is the way into the free spins bonus, and though you don’t get any more free spins for landing more scatters, you can certainly attract some bigger payouts. The minimum of three grants you 300x your stake, but four and five get you 3,750x and 30,000x respectively so it’s worth landing as many as you can! Not only that, but you also get a 3x multiplier added to whatever you win with your ten free spins, further boosting the potential payout you can land. And if that wasn’t enough, a further mini-game can be activated by landing three or more treasure chests in the main game, activating a pick and win feature that lets you gain as much as 2500 coins if you pick wisely.

Even if you don’t really know what’s going on in the 108 Heroes slot game it’s hard not to appreciate the cool visuals and even harder to ignore the amazing payouts that can come your way in just a single spin. Not many slots offer truly life-changing amounts of money so easily, so you’d be mad to miss out on your chance at the big time!