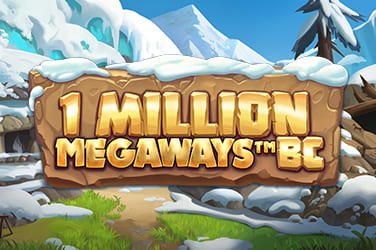 Developed by Iron Dog Studio, the 1 Million Megaways BC Slot Game is a six-reel video slot set around 2.5 million years in the past. The prehistoric theme resembles the popular movie Ice Age and offers an excellent gameplay experience with the chance to land some huge jackpots. The game is compatible with all devices, including touchscreen devices, thanks to the fully-optimised design.

With a Return to Player (RTP) of 96.20%, the 1 Million Megaways BC Slot Game is considered a high volatility slot and offers anywhere between 64 and 117,649 Megaways in the base game alone. This increases further with the bonus feature rounds, up to a maximum of one million Megaways.

The 1 Million Megaways BC Slot Game design is outstanding, with high-quality graphics throughout. The background is home to the cavemen and features snow-capped mountains and trees under the icy blue sky. The reels themselves sit on what appears to be heavy blocks of ice. The accompanying upbeat soundtrack further compliments the theme. Overall, the theming is terrific and instantly immerses you within the icy adventure.

Symbols-wise, you’ll find the usual low-paying playing card royals – 10, J, Q, K and A – alongside themed symbols such as a roaring snow tiger, moose, giant mammoth, caveman and cavewoman. The caveman is the most rewarding of the standard symbol set, offering payouts worth up to ten times your stake. The wild is represented by an ice block and can land on all reels except for the first, substituting for all standard symbols when it appears.

The 1 Million Megaways BC Slot Game’s minimum bet is set at a very reasonable $/€/£00.20, whilst the highest bet is limited to $/€/£50.00 per spin. You can easily adjust your bet level and can choose to use the autoplay or quick spin features if you’d prefer.

Whenever you form a winning combination, the Tumbling Reels feature will trigger, resulting in a ‘tumble’. When this happens, the symbols will be blasted away from the reels and replaced by new symbols and a new payout. This will then repeat again and again, with tumbles continuing until no new winning combinations are formed, or until you activate the free spins feature. Continuous tumbling reel wins lead to multipliers being applied to your win in 2x increments, up to a maximum of 8x.

The free spins feature is triggered when you land at least four tumbling reel wins in a row. The fire meter at the side of the reels will let you keep an eye on how many you’ve racked up so far. If you land four successive tumbling reel wins, you’ll be rewarded with eight free spins. Each extra tumble will reward you with a further two free spins, up to a maximum of 14.

But, that’s not all the fun there is to be had in the free spins feature. A new mammoth reel will also be added in the centre of the game, displaying up to nine symbols. This fully expanded design offers the chance to play with a vast 1,058,841 paylines during the round.

The 1 Million Megaways BC Slot Game is an outstanding game with excellent theming and superb graphics. The free spins feature is incredible and is the key to unlocking over one million winning ways. Combined with multipliers and sticky wilds, there’s the potential for huge payouts.